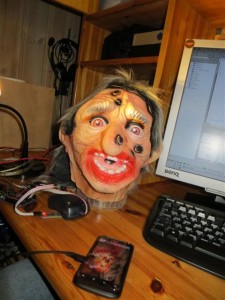 I’ve built an animated mask. It can move its eyes back and forth, and open and close its mouth. Everything is stuck together using duct tape and steel wire. It is controlled by an app on an Android phone, through a cheap Bluetooth module.

The microcontroller and android phone communicates with each other using a virtual COM port over Bluetooth. The Bluetooth code on the Android phone was based on the Bluetooth COM port example in the Android documentation. The Android app takes the X and Y coordinates of the finger touching the screen, converts them to servo positions and sends them to the mask each 100ms. If the app is not touched, it does not send new position data. When the mask is not receiving data, it will go into automatic mode and the servos will move by themselves following preprogrammed sequences. The eyes are painted ping-pong balls, and movement is done by three 9g servos.

For the sake of simplicity I used an Arduino in place of a breadboard. Here are some pictures: 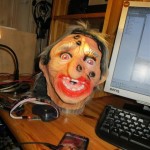 The mask can move the eyes back and forth, and open and close the mouth. 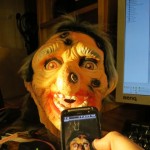 The mask is controlled from the phone 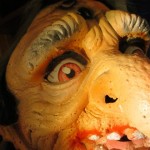 Hand painted eyes inside the mask 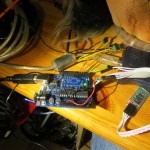 Controlled by an Arduino. To the right is the bluetooth module. 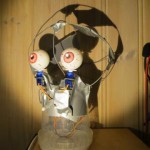 Inside the mask is a wireframe of steel wire and a plastic box. The eyes are screwed on the servo horns, so that I can adjust them without opening the mask. The third servo is taped to the box with a servo horn that pulls the yaw of the mask up and down. 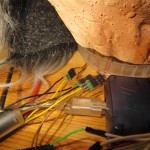 Wires into the servos. This was taken while I was creating the wires.